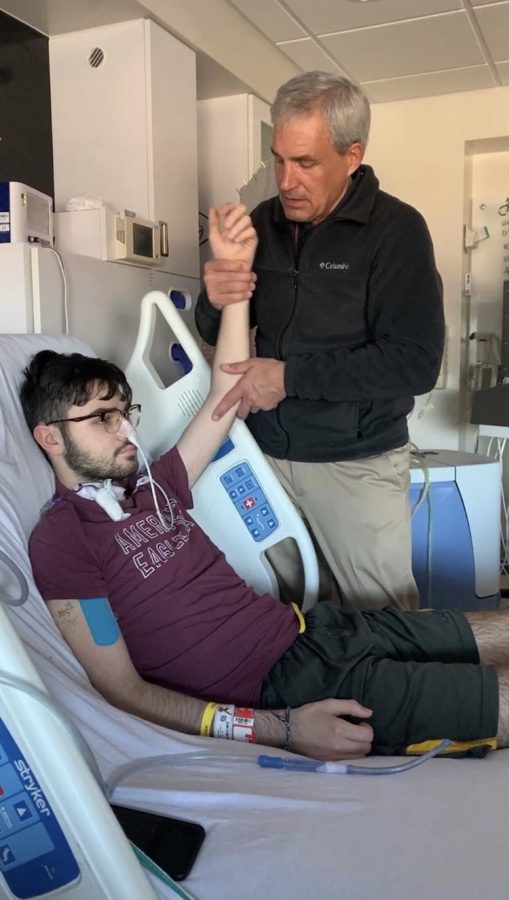 Sears needed all the help he could get to help his muscles move again.

GBS stems from the flu, but develops rapidly when a person’s antibodies attack their nerves instead of the virus. Sears experienced the harsh consequences of this syndrome, as it nearly paralyzed him.

Back in January, he thought nothing of the small cold he had caught. In a matter of days, the cold was replaced by an uncomfortable sensation in his feet and hands. When the sensitivity started to prevent him from performing routine tasks at work, Sears knew he needed to seek out medical assistance.

“When we went to urgent care, they were extremely confused,” said Sears. “There wasn’t much they could do except do a blood test, which came back negative for anything that could be wrong.”

Even his doctor couldn’t figure out what was causing the sudden numbness, so she quickly sent him to the ER.

After a long MRI of his brain and spine, the doctors concluded that Sears suffered from GBS. There was a chance that he might develop permanent physical disabilities if they didn’t begin treatment right away, but because of how unpredictable GBS is, his neurologist couldn’t promise that he would make a full recovery.

Sears feared what the following months would bring.

The hospital performed an IVIG treatment on Sears by injecting intravenous immunoglobulin into his arm through an IV. Because his body responded well, they sent him home. However, his relief was short-lived.

“The next morning I woke up feeling even worse. I could barely walk, couldn’t move my arms, and the muscles in my face began to stop working,” said Sears. “I couldn’t smile and I was slurring my words.”

Sears returned to the hospital and continued the same treatment as before, but this time with a physical therapy. His physical therapist helped him use a walker to move around.

Soon he was cleared to go home, but several days later Sears was forced to return to the hospital once more when his powerless body prevented him from swallowing any food or water. This resulted in him having to consume the necessities through a feeding tube.

His doctors knew they had to try something different.

“They were going to do a treatment called plasmapheresis,” said Sears. “This treatment is basically where they pumped all of my blood through a machine to separate my plasma, which contained the bad antibodies, and they put in a different liquid to take its place.”

Sears had to depend on others for everything. He had to be picked up if he needed to move, and even going to the bathroom was tough. The exhaustion was catching up to him, and he felt more miserable with every passing day.

But Sears continued to work tirelessly with physical therapists, no matter how hard it became. He held onto the sliver of hope that he would recover, and it got him through the 10 long days that he was in the hospital.

Before he knew it, he was cleared for the last time. Although the numbness didn’t vanish, Sears did not want to return to the hospital, so he used the thought as motivation to become stronger. From the comfort of his home, he fought his battle with physical therapy and his loved ones by his side.

It wasn’t until June that he began to feel more like himself. During a routine checkup, the doctors told Sears it would most likely take him over a year to fully recover. But he felt stronger, and most importantly, he was able to complete easy tasks on his own again.

Now, a couple of months later, Sears is back to normal. He may get tired easily, but he has yet to experience any lasting impacts of GBS. He sees his body improve every day, heading in the right direction for a full recovery.

“By going through this experience, I learned a lot about myself and others,” said Sears. “I learned that I’m a lot stronger than I had originally thought. No one is invincible. You hear about things like this and think, oh that will never happen to me, but it could. One of the most important things I learned is that you never know what anyone is going through; a lot of disabilities aren’t visible right away so it’s important to be kind to everyone. It also made me realize just how privileged I was and it really makes me appreciate every single thing I have so much more.”